I had started coding on Windows. I began to get familiar with the graphical interfaces of NetBeans, Visual Studio, Eclipse etc. As I got to know more about programming and developing I began to hear about a certain thing called ‘linux’. This word kept popping out in many articles of stackoverflow or other resources that I used to depend upon. At first the name gave me the image of a computer with a pitch black screen with just plain text appearing on it. I then came to know about the power of the linux terminal. As I already had a little experience with bash scripting in Windows command prompt, I began to realize the usefullness of such an operating system. But due to my busy schedule I couldn’t delve further in this topic at that time.

A few years later one of my friends told me that she had installed Ubuntu on her desktop PC. I knew it was one of the Linux distribution. Then she started comparing it with Windows. This increased my interest in Ubuntu and I began to think of switching to it from Windows. I also heard from some other resource that the graphical interface of Ubuntu is sufficient for people to start working on it without any prior experiences. This set my mind and I finally installed Ubuntu in parallel with Windows.

During the initial days I started to use the graphical interface of Ubuntu for my work. Side by side using various references I got to know more and more about the terminal. Although it took me around a full week to download all my softwares required for various programming languages and to get them working right, I learned a lot about Ubuntu. From then on I used to code in Ubuntu while did other work in Windows. Within a few weeks I had started using the terminal excessively. I had stopped using IDEs and used the text editor ‘gedit’ and terminal instead for compiling and running programs. Within another few months I stopped using Windows entirely except for very few softwares for whom I couldn’t find replacements in Ubuntu.

Some features of Linux over Windows: 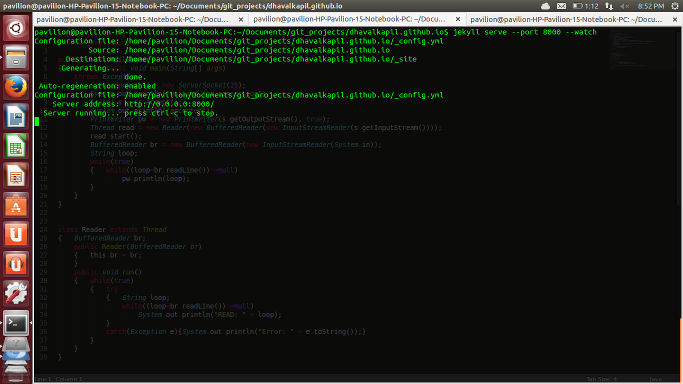 Currently I do practically all my work using the terminal. Whenever I open my laptop my first keys are Ctrl-Alt-t which opens the terminal and last keys are sudo shutdown -h now which shut downs the laptop. I’ve started loving it. Now I even download files, download videos from youtube, send mails and use facebook(yeah even this!) using the terminal. It has made things much easier and systematic. Imagine liking and commenting on 100+ posts on your birthday and compare it with hardly a few commands at the terminal doing the same thing. It saves a lot of time. Apart from that I use ‘Sublime Text 2’ for writing code, ‘vim’ when I need to change a few lines and ‘chromium web browser’ for browsing the web.