Somewhere back in May, I started getting messages such as this on facebook: 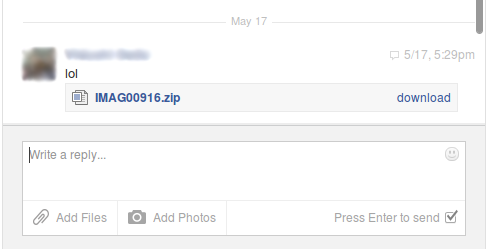 I had around 300 friends then and got almost 8-9 such messages. The interesting thing was that those people were completely unrelated. According to me some of them didn’t know each other. Suspecting some trick I decided to analyze the file.

I downloaded the zip file and verified it’s type using linux file command. Then after unzipping the file I found a jar file inside it. Just for reference a jar file is a java archive file which can be run by simply double clicking it. It is equivalent to exe file in C/C++. Another important point to note is that a jar file is infact a zip file(only the extension has been changed). So the next step I did was to extract the jar file. Doing that produced a single class file alongwith the usual META-INF

Next I decompiled the class file using the jad tool.

It created CNQNYPYFEBMJTHYPMGR.jad which contains the source code for the java program. The resulting code was pretty much obscure. All Strings were stored as int arrays of ascii codes. The arrays were dynamically converted to String within the code. I present here an easy to understand version of the code.

Instead of going through the code liny by line I will explain the whole code at once. The program tries to download a certain file from a dropbox link. The same file has multiple links so that if one fails the others might work. If it get’s a successfull HTTP response code it downloads the file to C:\temp\NWQGHJ.MXZ. The program then register’s it to windows using the regsvr32 command line operation running in silent mode (/s). So what I did was that I downloaded the file(d.dat) manually from the dropbox link and ran a filecommand with it.

This shows that the file is a Windows DLL file.

I tried a few ways at first which seem to be leading to nothing, including strings and objdump. Later I renamed it to d.dll(did that to make sure my antivirus on windows finds it) and switched over to windows. Here’s a snapshot of what my antivirus found:

Hence it somehow connects the dll with the windows process explorer.exe. This process is the one used to browse the files in a computer. Next I used strings command and stored the result in a file.

Then I opened the file in a text editor and searched for .exe. This resulted in two matches:

Seems to be getting somewhere. Browsing through the 59252 lines I found the following two snippets:

I searched about minerd.exe on the internet and found out this:

minerd.exe is a part of multi-threaded CPU miner for Bitcoin crypto-currency system. Very often this application causes CPU usage to go to 90% or even more. Needles to say it’s not essential for Windows and may cause problems. If you knowingly installed this Bitcoin miner on your computer then there’s nothing to worry about. Even if you antivirus says it’s a trojan horse it’s probably a false positive. However, cyber crooks and fraudsters are using this software to earn some extra money as well by monetizing botnets. They drop the main mining modules on infected computers and start mining. They usually set low mining speed, so that the minerd.exe process only uses unused CPU cycles.

So basically this file uses the CPU to mine for bitcoins. It is a core part of the bit coin virus. But it doesn’t stop here. The file further sends the same message to other people on facebook. In case they open it, the same thing happens again. In this way a botnet(collection of programs communicating over a network with other similar programs to perform tasks) is set by the attacker to mine the bitcoins!

In short this trojan does the following things: