The Domain Name System is an essential component of the functionality of most Internet services. It provides a distributed solution for services such as resolving host names to IP addresses and vice versa. DNS was designed around the early 1980s without any security consideration. This was mainly because at that time networks were quite small. All the hosts in the network were known beforehand and trustworthy. There was no need for authenticity.

But as the network grew and Internet was born DNS remained unchanged. This resulted in lots of threats that target DNS due to the lack of authenticity and integrity checking of data held within the DNS. In 1994, the Internet Engineering Task Force (IETF) started working to add security extensions known as Domain Name System Security Extensions (DNSSEC) to the existing DNS protocol. Unfortunately, these extensions are still far from being adopted.

A discussion on each of these topics is presented in this blog.

The Domain Name System (DNS) is a hierarchical distributed naming system for computers, services, or any resource connected to the Internet or a private network. It associates various information with domain names assigned to each of the participating entities. Most prominently, it translates domain names, which can be easily memorized by humans, to the numerical IP addresses needed for the purpose of computer services and devices worldwide. 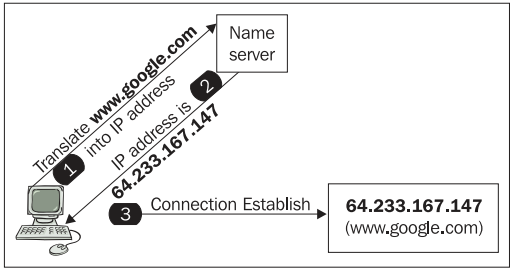 DNS is like a phone book for the Internet. One can’t remember each and every IP for the websites that he or she visits. It’s much easier to remember the domain names instead.

In a Zone File Compromise attack, the attacker attacks the DNS server by gaining direct access to these machines. He/she can be in physical contact with the server or connected through an SSH/RDP connection.

Security measures: Restrict access to the DNS server, both physically and remotely.

The attacker just pretends to be a Slave DNS Server and asks the Master DNS Server for a copy of the records. These records reveal a lot about the topology of the internal network. Steps for performing Zone Transfer(on a UNIX machine):

Displays the authoritative name servers for that domain

Retrieves all the DNS records from a particular nameserver

Security measures: Restrict zone transfers to particular IP addresses or use any other kind of authentication.

This type of attack is used to perform DOS attack on a victim host using genuine DNS servers. It involves sending DNS packets to a DNS server, spoofed with source IP as the victim IP. The DNS server responds back with much larger DNS responses that go to the victim host.

DNS Client Flooding aims at sending a flood of UDP requests to the DNS server to exhaust its resources. A common technique is to send DNS request packets for an invalid domain. The DNS server spends its resources to look for this domain. After a certain limit, it has no resources to serve legitimate requests.

This can be abused by an attacker to place false information in the local DNS server’s cache. The attacker needs to reply back to the configured DNS server with the malicious address before the actual reply comes back.

A shared host environment is where one DNS server is shared amongst many users and domains.

Free Services such as cpanel provide such facilities.

Say an attacker using a shared DNS server creates a zone file for xyz.com domain and adds relevant A and MX records. Now any user who has the said DNS server configured as primary from a client will when attempting to go to xyz.com be directed to the records as configured by the client i.e. potentially false information.

An attacker can intercept the name resolution queries sent by the client to a DNS server. He/she can send back incorrect replies back to the client. This type of attack is very much a race condition, in that the attacker needs to get his reply back to the client before the legitimate server does. The client shall only look at the first response it gets and there is no way it can differentiate between the attacker or its DNS server. 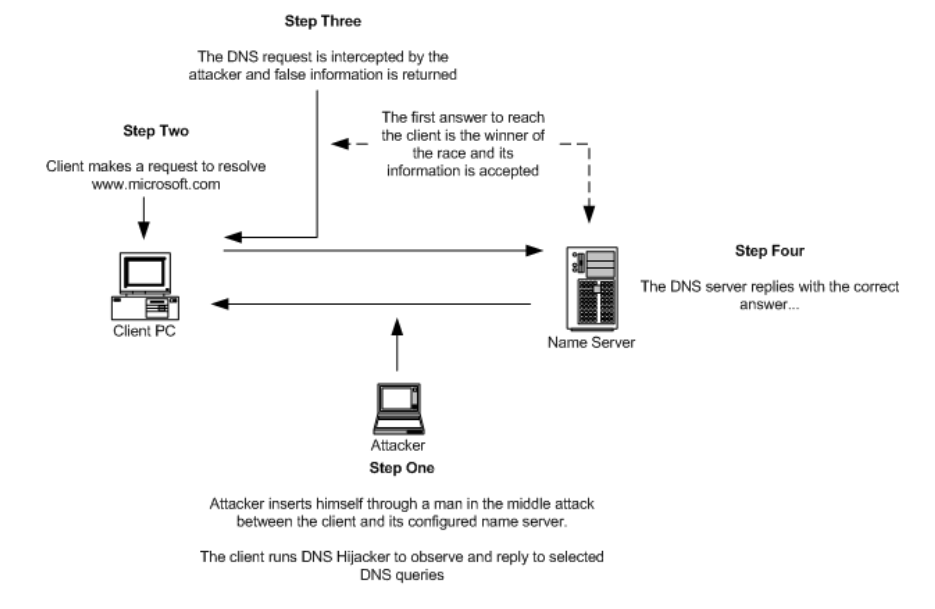 Typosquatting, also called URL hijacking, sting site, or fake URL, is a form of cybersquatting, and possibly brandjacking which relies on mistakes such as typographical errors made by Internet users when inputting a website address into a web browser. Should a user accidentally enter an incorrect website address, they may be led to any URL (including an alternative website owned by a cybersquatter).

The attacker registers similar sounding domain names. This threat does not target a particular victim.

Around 1994, the IETF started a discussion to make DNS secure by adding a set of extensions to it. These extensions, labeled as Domain Name System Security Extensions (DNSSEC), were formally published in 2005. Unfortunately, even after around 10 years, DNSSEC is still not adopted even though its backward compatible. Mostly because network operatives prefer stability over complexity.

Backward compatibility was enforced by using the RR (Resource Record) construct of the DNS that was purposely designed to be extensible. A new set of RRs was defined that holds the security information. While designing DNSSEC, performance issues were kept in mind.

In all DNSSEC provides authentication and integrity to the DNS. This helps in preventing many attacks. Cache poisoning and Client flooding attacks are prevented with the addition of source authentication. Even Zone File Compromise attack is mitigated. Note however that DNSSEC does not provide any security against information leakage.

Note: I recently did a talk about DNS Security in my college. Slides can be found here.

Edit: Lately there has been work on minimizing information leakage. This is a good resource. Thanks to captnemo for pointing this out.