I am interested in exploiting binary files. The first time I came across the buffer overflow exploit, I couldn’t actually implement it. Many of the existing sources on the web were outdated(worked with earlier versions of gcc, linux, etc). It took me quite a while to actually run a vulnerable program on my machine and exploit it.

I decided to write a simple tutorial for beginners or people who have just entered the field of binary exploits.

What will this tutorial cover?

This tutorial will be very basic. We will simply exploit the buffer by smashing the stack and modifying the return address of the function. This will be used to call some other function. You can also use the same technique to point the return address to some custom code that you have written, thereby executing anything you want(perhaps I will write another blog post regarding shellcode injection).

This tutorial is specifically written to work on the latest distro’s of linux. It might work on older versions. Similar is the case for gcc. We are going to create a 32 bit binary, so it will work on both 32 and 64 bit systems.

Now this programs looks quite safe for the usual programmer. But in fact we can call the secretFunction by just modifying the input. There are better ways to do this if the binary is local. We can use gdb to modify the %eip. But in case the binary is running as a service on some other machine, we can make it call other functions or even custom code by just modifying the input.

Memory Layout of a C program

Let’s start by first examining the memory layout of a C program, especially the stack, it’s contents and it’s working during function calls and returns. We will also go into the machine registers esp, ebp, etc.

Divisions of memory for a running process 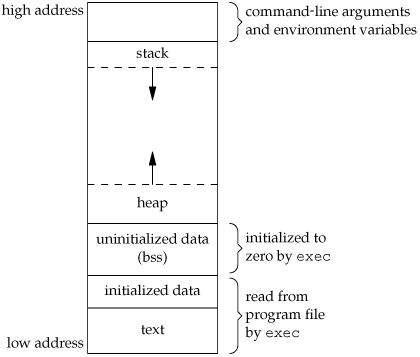 Consider the following piece of code:

Assume our %eip is pointing to the func call in main. The following steps would be taken:

This is how the stack would look while in func. 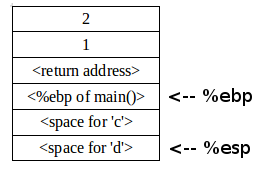 Buffer overflow is a vulnerability in low level codes of C and C++. An attacker can cause the program to crash, make data corrupt, steal some private information or run his/her own code.

It basically means to access any buffer outside of it’s alloted memory space. This happens quite frequently in the case of arrays. Now as the variables are stored together in stack/heap/etc. accessing any out of bound index can cause read/write of bytes of some other variable. Normally the program would crash, but we can skillfully make some vulnerable code to do any of the above mentioned attacks. Here we shall modify the return address and try to execute the return address.

Here is the link to the above mentioned code. Let’s compile it.

-fno-stack-protector disabled the stack protection. Smashing the stack is now allowed. -m32 made sure that the compiled binary is 32 bit. You may need to install some additional libraries to compile 32 bit binaries on 64 bit machines. You can download the binary generated on my machine here.

You can now run it using ./vuln.

Let’s begin to exploit the binary. First of all we would like to see the disassembly of the binary. For that we’ll use objdump

Running this we would get the entire disasembly. Let’s focus on the parts that we are interested in. (Note however that your output may vary) 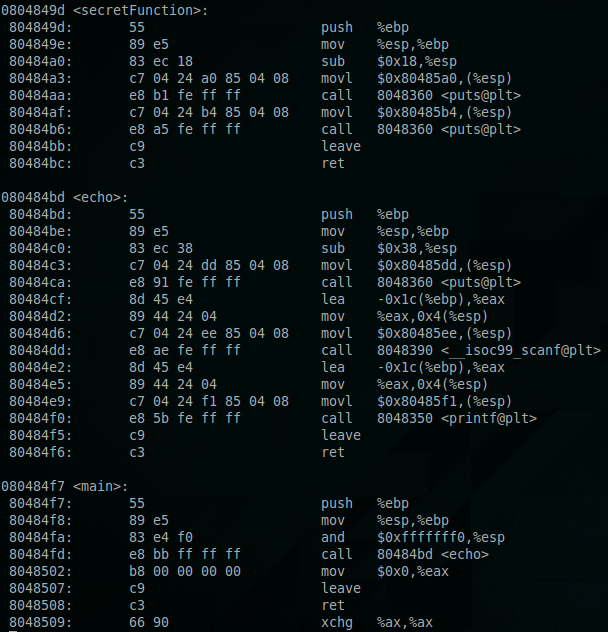 Note: Registers are 4 bytes or 32 bits as the binary is compiled for a 32 bit system.

The address of the secretFunction is 0804849d in hex. Now depending on whether our machine is little-endian or big-endian we need to decide the proper format of the address to be put. For a little-endian machine we need to put the bytes in the reverse order. i.e. 9d 84 04 08. The following scripts generate such payloads on the terminal. Use whichever language you prefer to:

Note: we print \x9d because 9d was in hex

You can pipe this payload directly into the vuln binary.

This is the output that I get:

Cool! we were able to overflow the buffer and modify the return address. The secretFunction got called. But this did foul up the stack as the program expected secretFunction to be present.

What all C functions are vulnerable to Buffer Overflow Exploit?

Whenever you are using buffers, be careful about their maximum length. Handle them appropriately.

While managing BackdoorCTF I devised a simple challenge based on this vulnerability. Here. See if you can solve it!